Centenary of the Alumni Association

The Downing College Alumni Association celebrates its centenary on 7 October 2022, one hundred years after it was founded at a dinner in London. This online exhibition shares some of the major developments in the Association's long history. 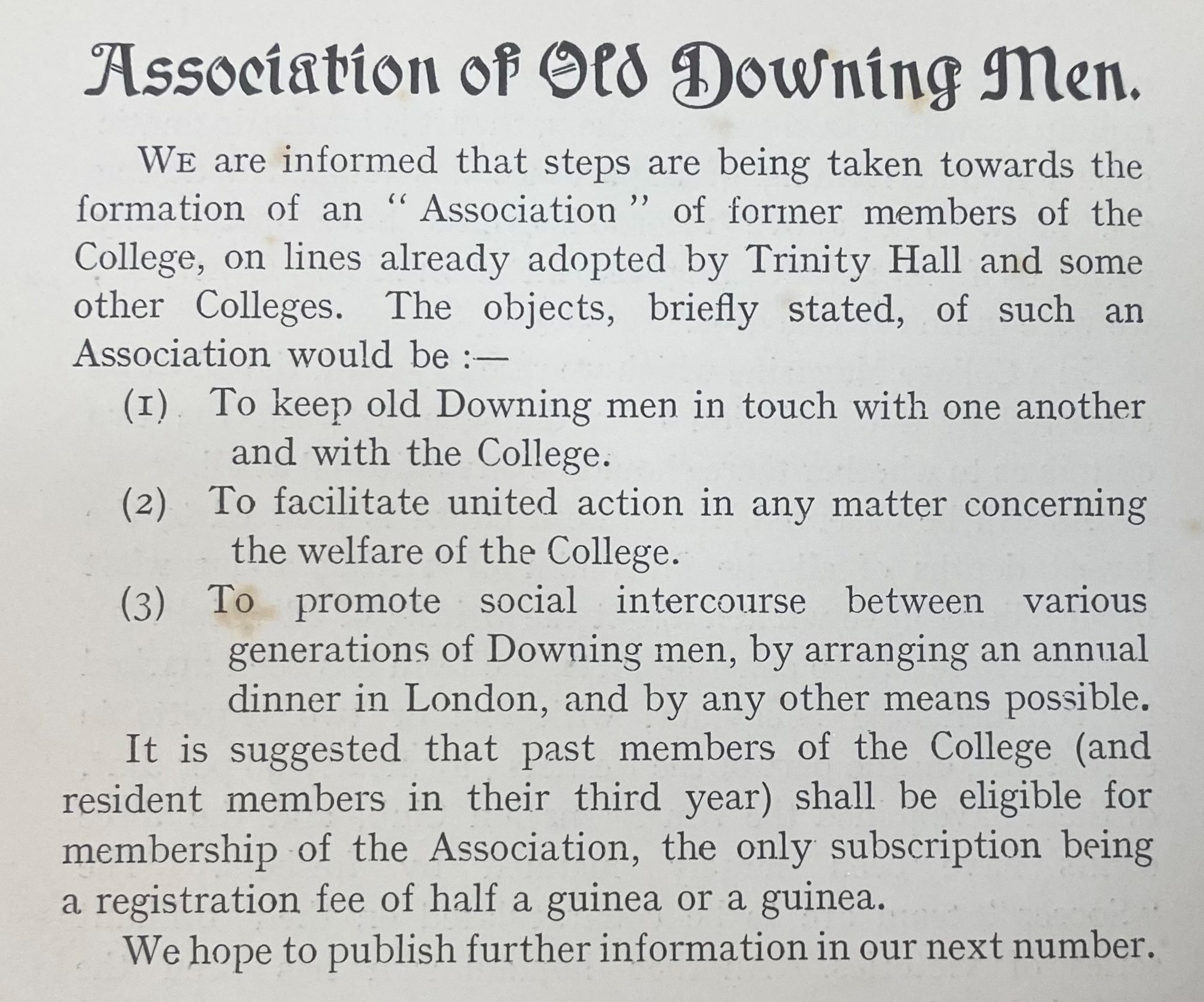 Proposal for an "Association of former members", 1907

Extract from 'The Griffin', Michaelmas 1907

The suggestion that the formation of an Association would quickly follow this article proved very optimistic. Although the matter was raised again at a dinner in 1913 and the Griffins' London dinner in 1914, the outbreak of war meant that the issue was set aside for several more years. 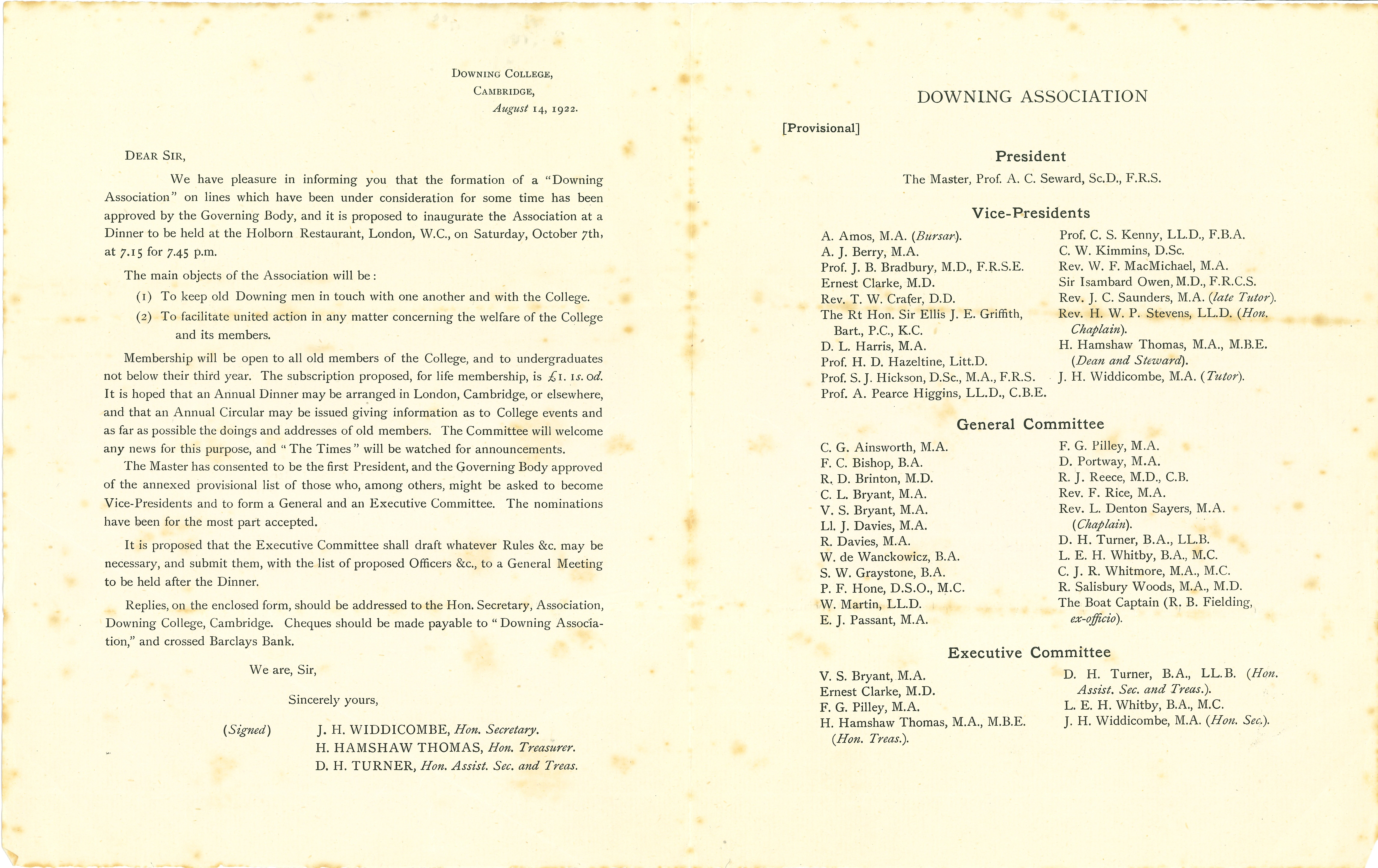 Final approval for a "Downing Association", 1922

Notice of the formation of the Downing Association, with objectives (DCCS/1/7/1)

Following the First World War, Downing students preparing to graduate were especially keen to keep in touch with each other and the College and so the idea of a Downing Association was again raised in the student magazine, The Griffin, in April 1921 and at the first post-war Downing dinner in London later that year. The Governing Body was initially concerned that an Association of old Downing men might try and run the College and "might grow into a Frankenstein which could make life very uncomfortable for quiet academics". These reservations were eventually overcome with the suggestion that the Tutor, James Henry Widdicombe, should be the first Secretary and a memorandum was circulated on 14 August 1922 announcing the formation of the long-awaited Downing Association at its inaugural dinner to be held on 7 October. The Association's main objectives were to keep old members "in touch with one another and with the College" and to "facilitate united action in any matter concerning the welfare of the College and its members". 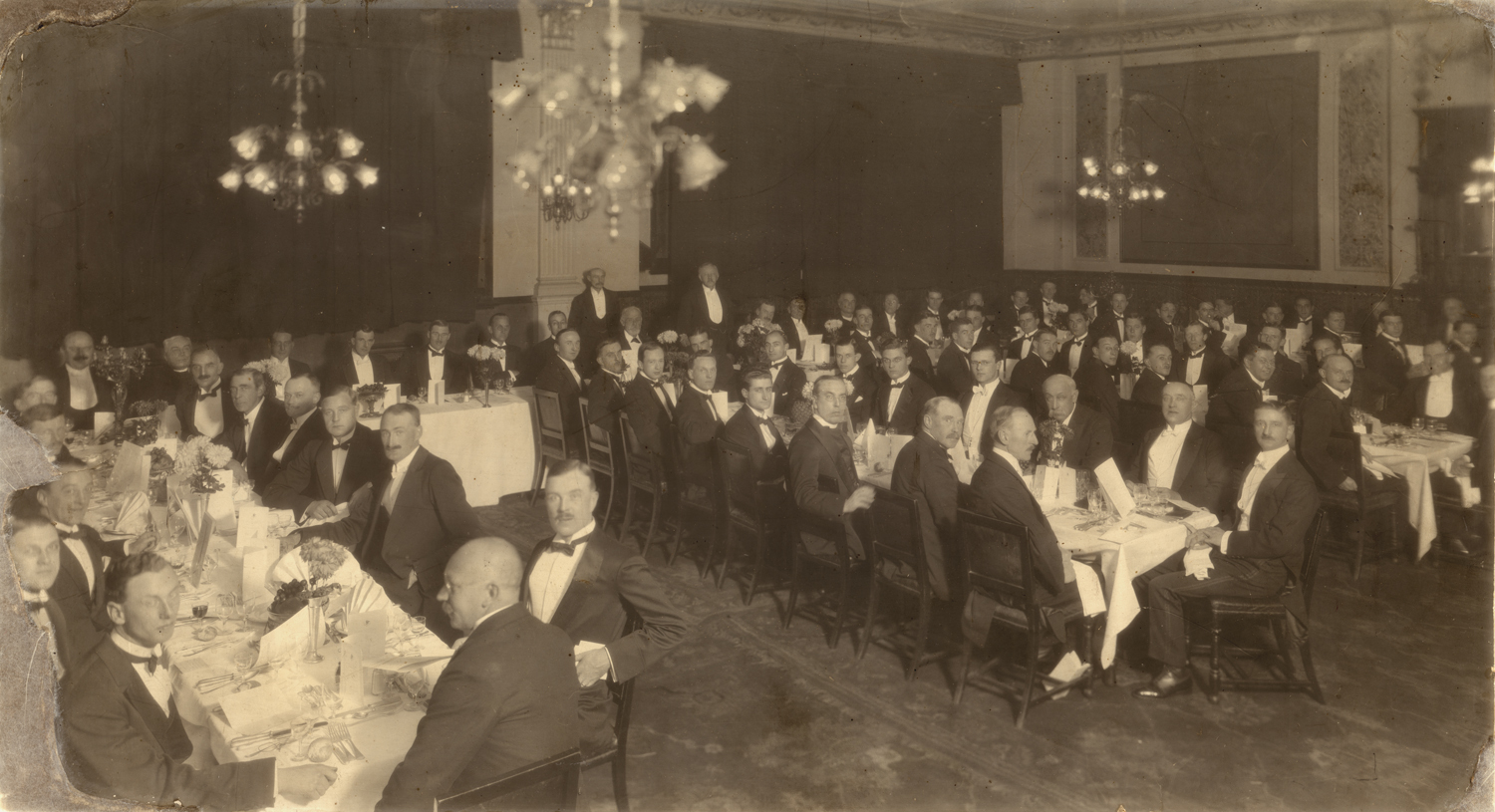 The Downing Association was officially formed at this dinner on 7 October 1922. The Master was elected as the first President, with the Tutor elected as Secretary and the rest of the Governing Body elected as Vice-Presidents. As a result, the Association was effectively controlled by the College in its early years, although the Executive Committee was made up largely of alumni, including recent graduate (and later Master) Lionel Whitby. 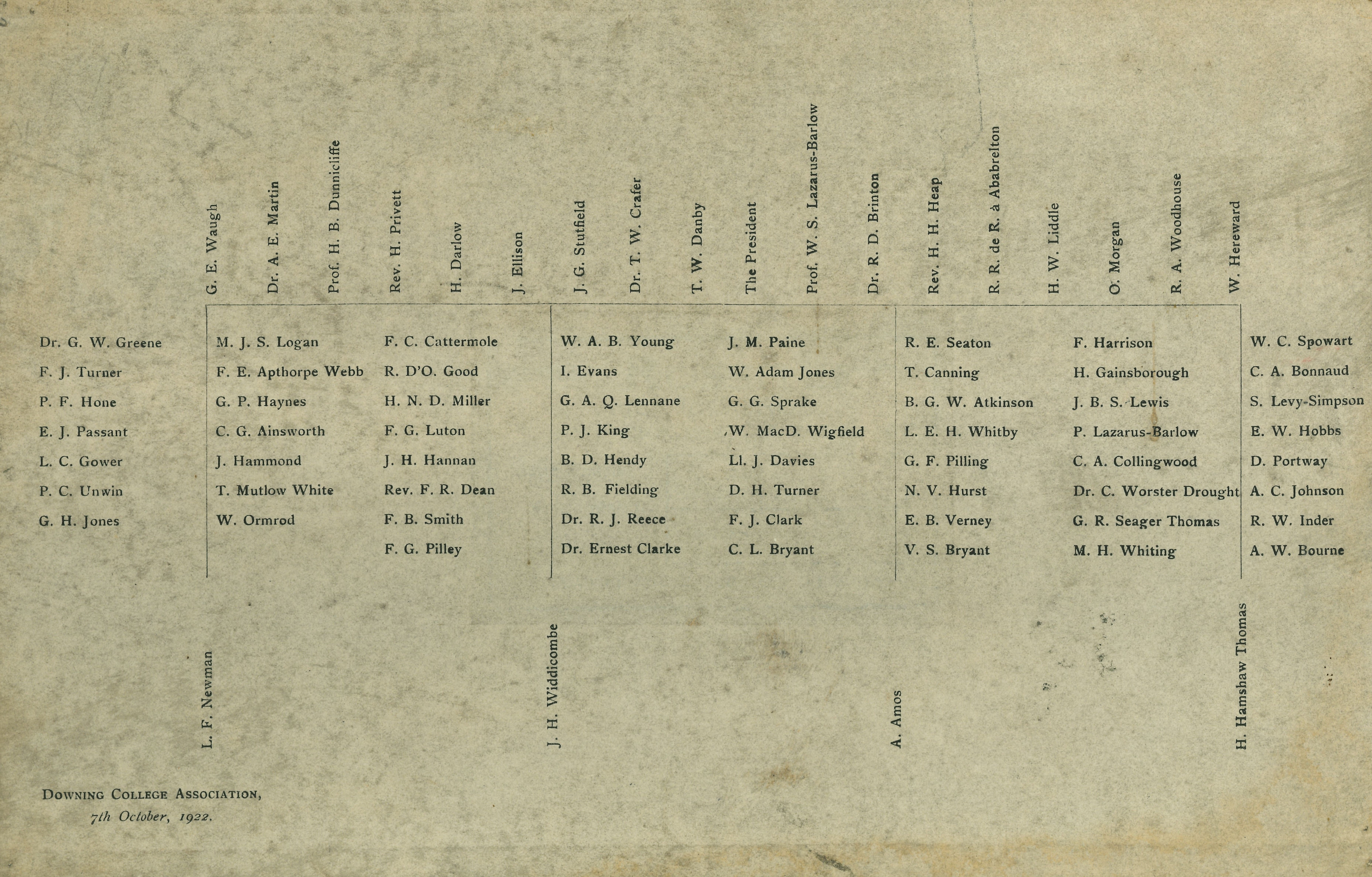 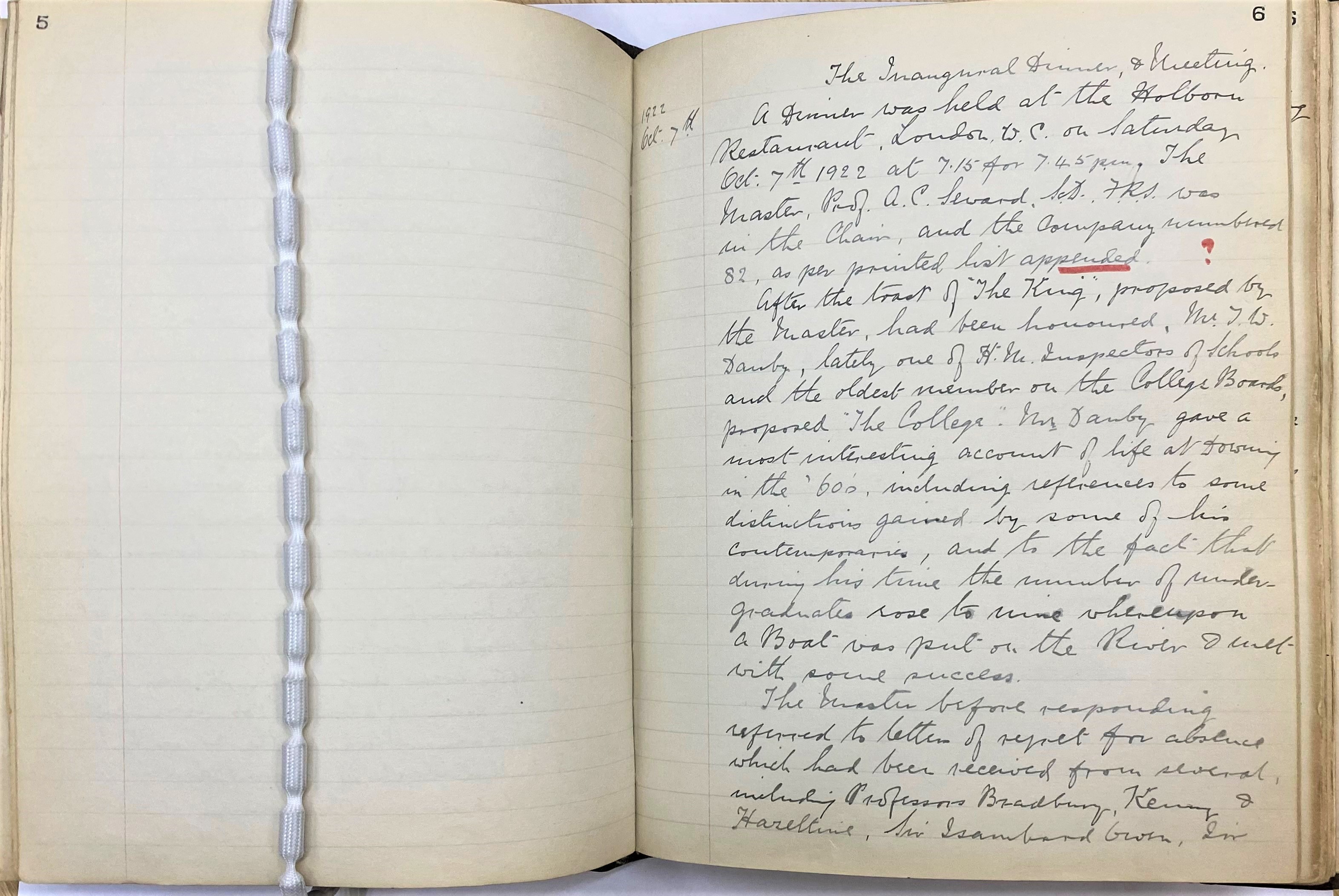 Extract from the minutes of the inaugural meeting, 7 October 1922

The Master, Professor A. C. Seward, was invested as the Association's first President with a 'handsome badge of office in the shape of an enamelled copy of the College arms suspended from a collarette', presented by a member of the provisional committee. The President of the Association changed annually, with Seward followed in 1923 by Thomas Danby, former Fellow and the oldest member on the College boards (who shared his memories of Downing in the 1860s in this extract). 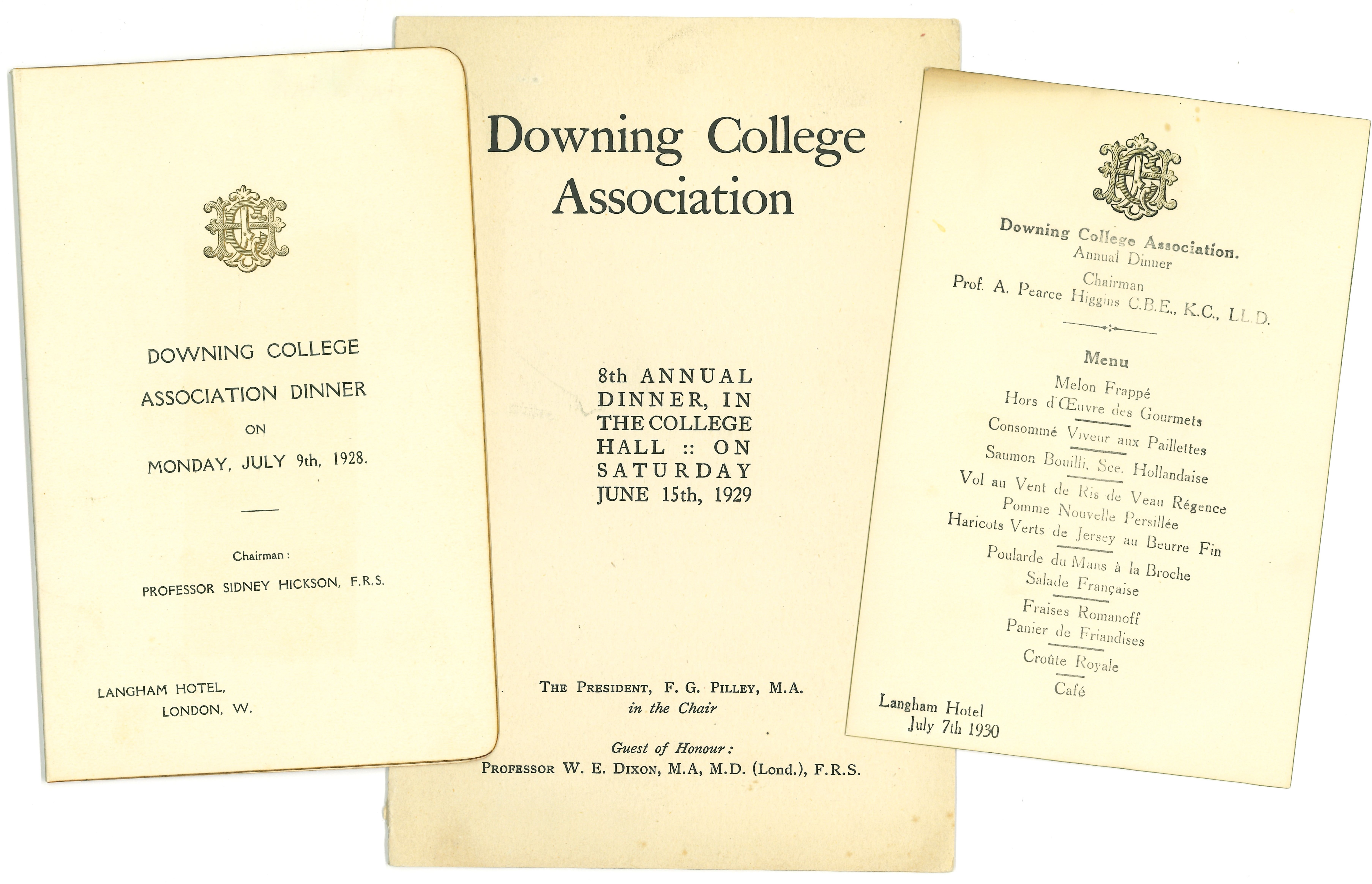 These are some of the earliest surviving menus for Association dinners in the College Archive.

The Association’s second dinner was held in College on 14 April 1923, with most of the 66 members present staying in their old rooms. Annual dinners alternated between London and the College in the early years, with discussions about subsidiary regional dinners in Manchester or Liverpool, although these were not introduced until 1953. 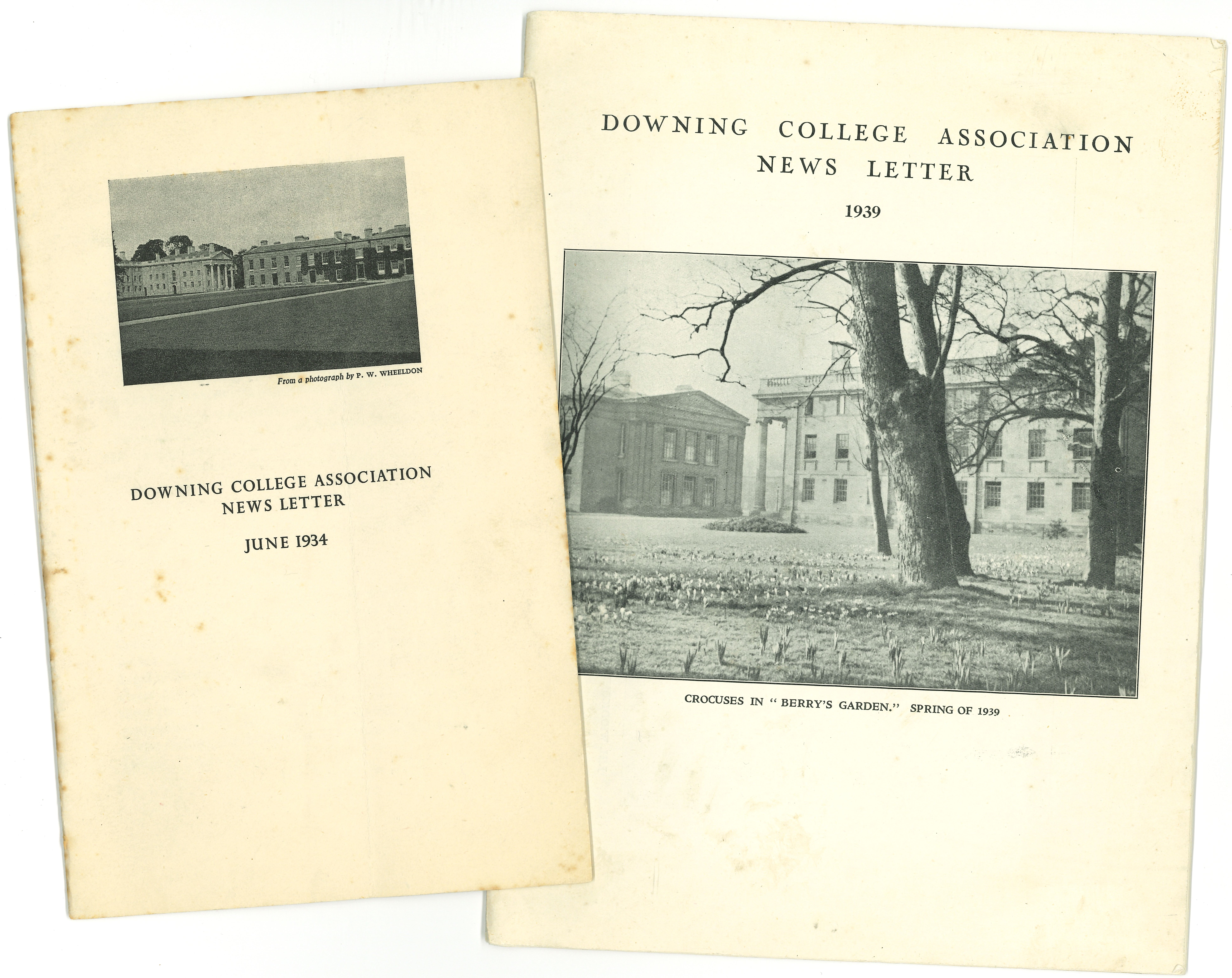 Launch of the Association Newsletter and other initiatives

H. C. Whalley-Tooker took over as Secretary in 1931 and the Association flourished, supported by subscriptions for life membership (at £1 1s 0d), introduced in 1926. The annual News Letter*, sharing news of College developments and members, was launched in 1934 with a circulation list of 700. (By the 1960s, it had become the main record of College life after changes to The Griffin.) In 1937, two further initiatives were announced: a Benevolent Fund to help undergraduates suffering a ‘financial disaster’ and the formation of a group of around 30 former members acting as career advisers to current students. Shortly after the first award from the Benevolent Fund, the outbreak of the Second World War meant that meetings of the Association ceased until 1946 and only one News Letter was produced due to war-time difficulties and paper shortages. When Whalley-Tooker stepped down as Secretary in 1947, he was replaced by H. W. Liddle (1906), the first alumnus to hold the post. He carried out an energetic recruitment drive targeting lost members, expanded the News Letter and fostered good relations between the Association and Governing Body. 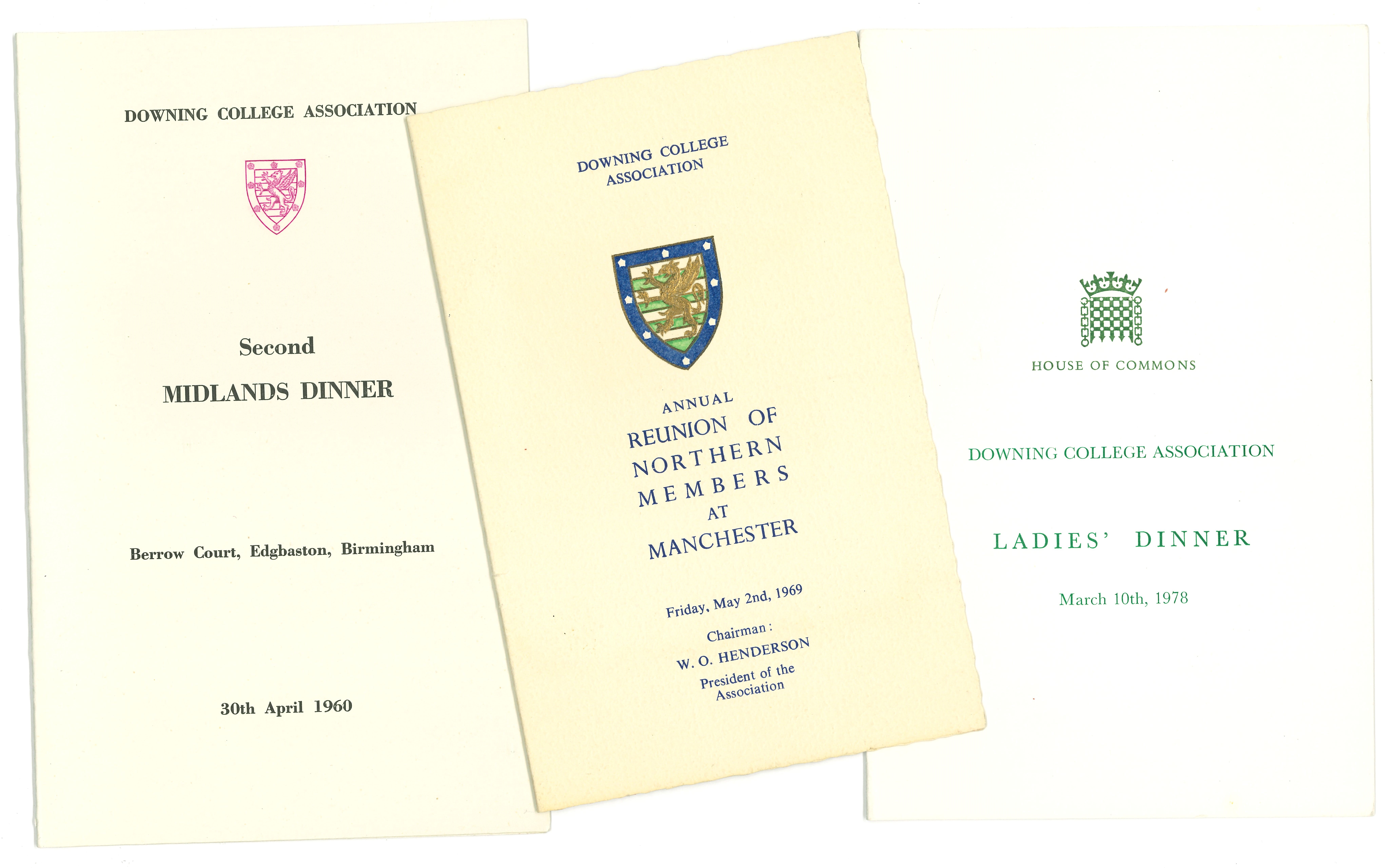 The first regional dinners were held in Manchester and Birmingham in 1953, with special Ladies' events introduced from 1957.

Around 30 members attended the first Manchester and Birmingham events and members’ ‘ladies’ were invited to a special tea before the 1957 Association dinner, although the dinner itself remained strictly members-only. The first Northern region ladies’ dinner in 1966, attended by 18 members and their wives, prompted another discussion of the matter of members’ wives accompanying them to the annual dinner in College, but the difficulties keeping ‘the ladies entertained whilst their husbands feasted were so apparent that the [Association] decided not to do anything about it’! (Downing Association News Letter) 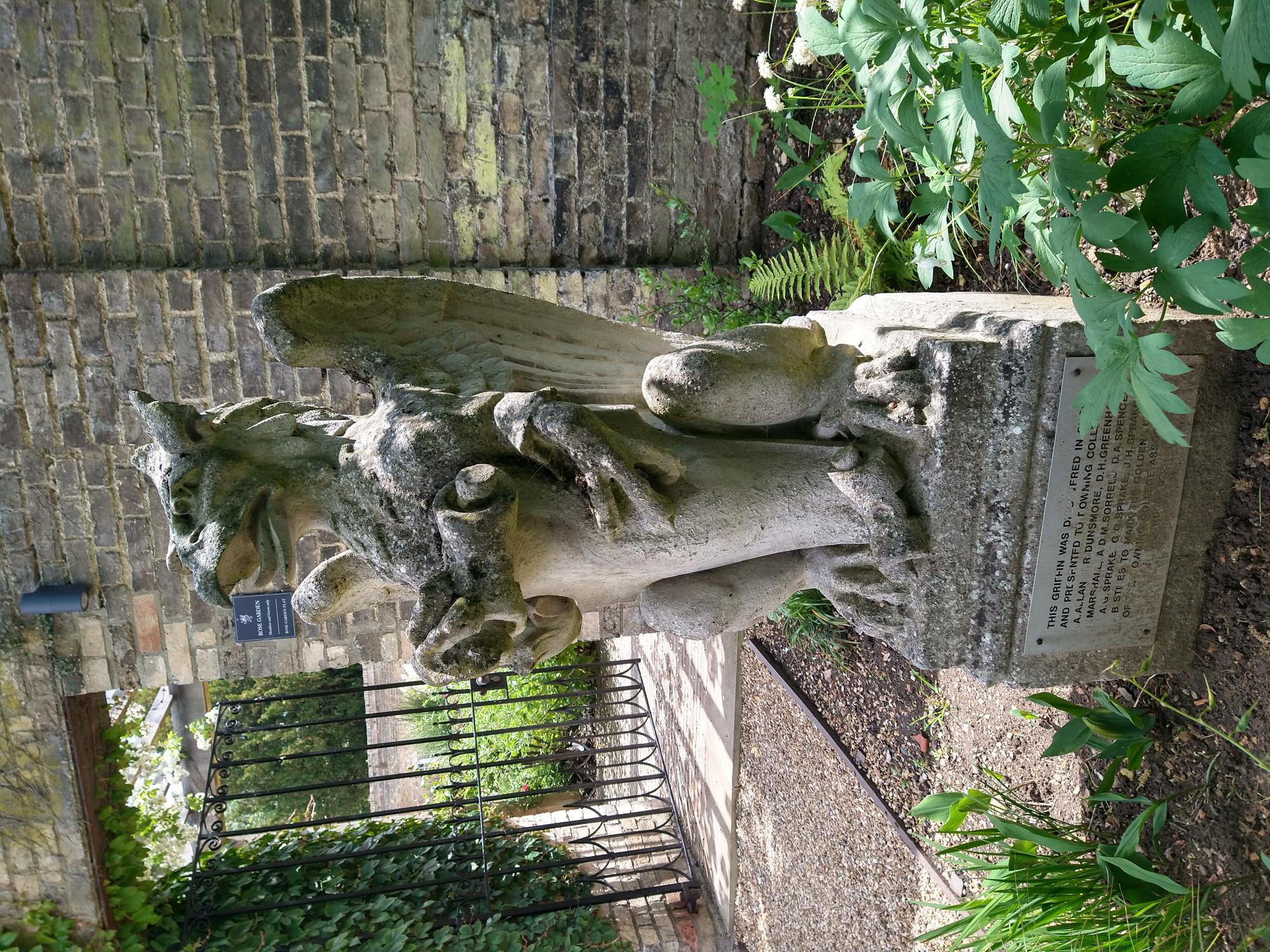 A mystery gift for the Golden Jubilee

A stone Griffin arrives to mark the 50th anniversary of the Downing Association, 1972.

The Downing College Association celebrated its Golden Jubilee in 1972. Shortly before the annual dinner, a stone Griffin statue arrived in College unexpectedly. It had been found in an antiques yard by A. G. Sprake and purchased for the College with contributions from a number of his contemporaries to mark the Association's 50th anniversary. Unfortunately, the accompanying letter, explaining the arrival of the gift, got lost in the post and so its arrival caused some confusion! The Griffin was originally installed in the West Lodge Garden, but now guards the entrance to the Rose Garden in the East Lodge Garden. 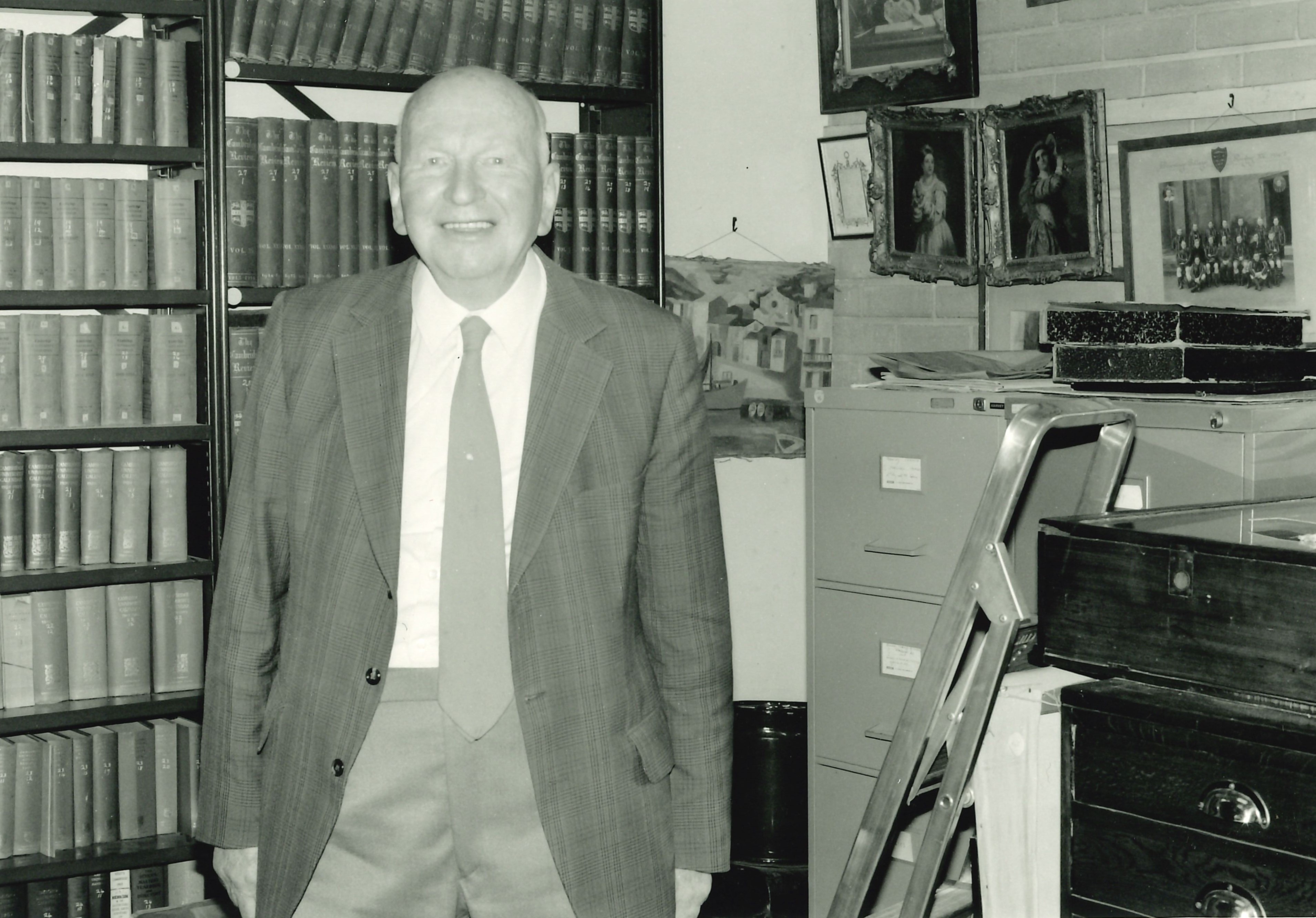 Diversification: merchandising and the Association Prize

Stanley French (1924, later Fellow, Steward and Honorary Archivist) was elected Secretary of the Association in 1956, jointly with C. K. Phillips (1936) until 1971. He served for a remarkable thirty years and, in 1978, the Association began selling his ‘History of Downing College’ along with the Ackermann aquatint (1814), the first of several reproduction prints. The success of both of these initiatives led the Association to investigate other retail opportunities, with the introduction of an Association tie in 1980, Christmas cards, a second history volume by French and additional prints supporting the launch of the Downing College Association Prize in 1981. The Prize was initially 100 guineas (£105), awarded to an undergraduate showing ‘outstanding academic prowess’. Today, the the annual prize is £300, awarded to graduating students performing best in their final examinations. 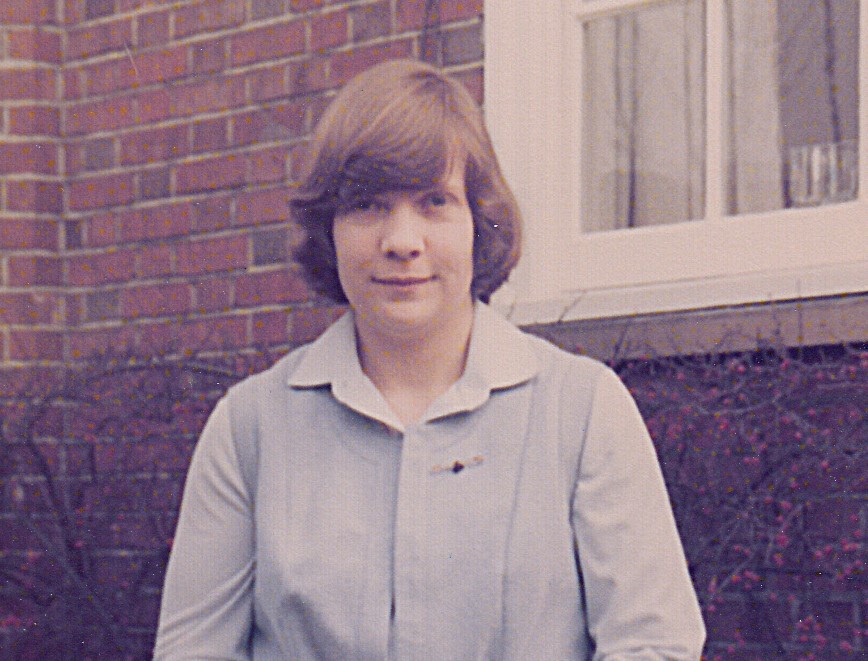 The first female members and the creation of the Development Office

The admission of women to the College heralded the biggest change in the Association’s history. Dr Jane Weston, first female Fellow of the College in 1978, became the Association's first female member in 1979 and she was followed in 1983 by twelve of the first women graduates. Four current and former Masters’ wives were also elected Honorary Members and, in 1985, Penny Furniss (1981) became the first woman member to attend an Annual Reunion. Further changes followed the creation of the Development Office in the 1990s, which gradually absorbed some of the Association's traditional functions of keeping in touch with alumni in addition to the introduction of new events and initiatives. The Association introduced several new initiatives of its own: an after-dinner speaker (Honorary Fellow P. D. James) at its Annual Dinner to celebrate the College’s Bicentenary year in 2000, book grants for students and, from 2001, the extension of the Annual Dinner invitation to spouses on alternate years, with the hope of encouraging more younger members to return. An Alumni Day, developed by the Development Office to support the Association’s Annual Dinner, also ensured that numbers attending both remained high.

Image courtesy of Dr Jane Shemilt, with grateful thanks. 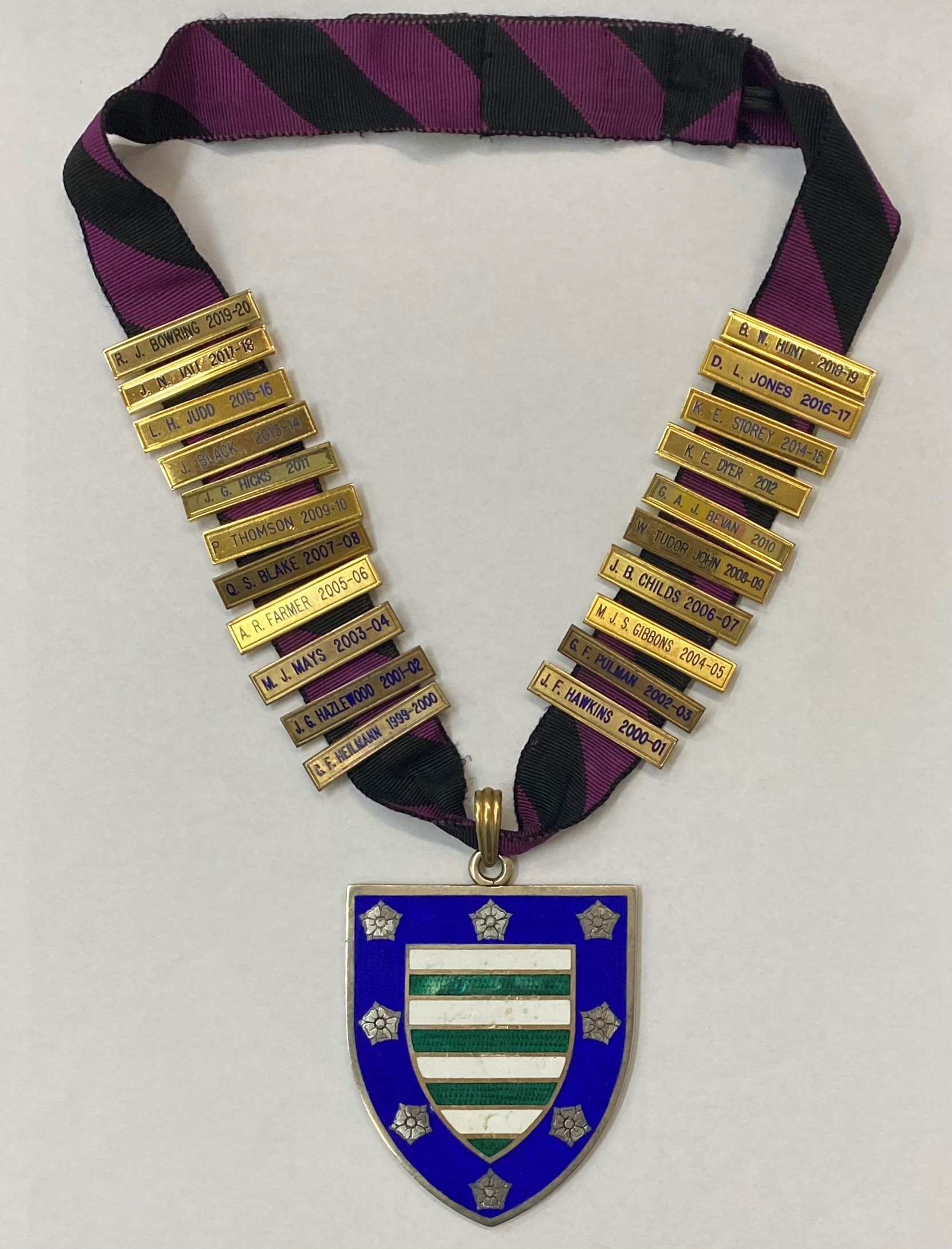 Following a review of its functions in 2005, the Association's Executive Committee concluded that it still had an important role to play, “working in close co-operation with the College Development Office, enabling members to meet, to keep in contact with each other, to be informed of Downing life and to help the College”.

Following this review, the Association established a Student Support Fund (later renamed the Alumni Support Fund), supported by an extended and high-quality range of merchandise and, consequently, the £5000 awarded in grants in 2005 had doubled by 2008. This new financial support offered by the Association proved especially important in difficult years, when demands on the College’s own hardship fund were high. In 2011, the Association sponsored a new student photographic competition, ‘Downing from a New Perspective’ (now an annual event) and continued to look for new merchandising opportunities at College events. The sale of Association merchandise has continued to flourish thanks to a committed group of volunteers, underpinning the provision of financial support to current students through the Alumni Support Fund.

(The gold Griffin on the President's medallion was sadly lost in 2017 and it was replaced in 2020.) 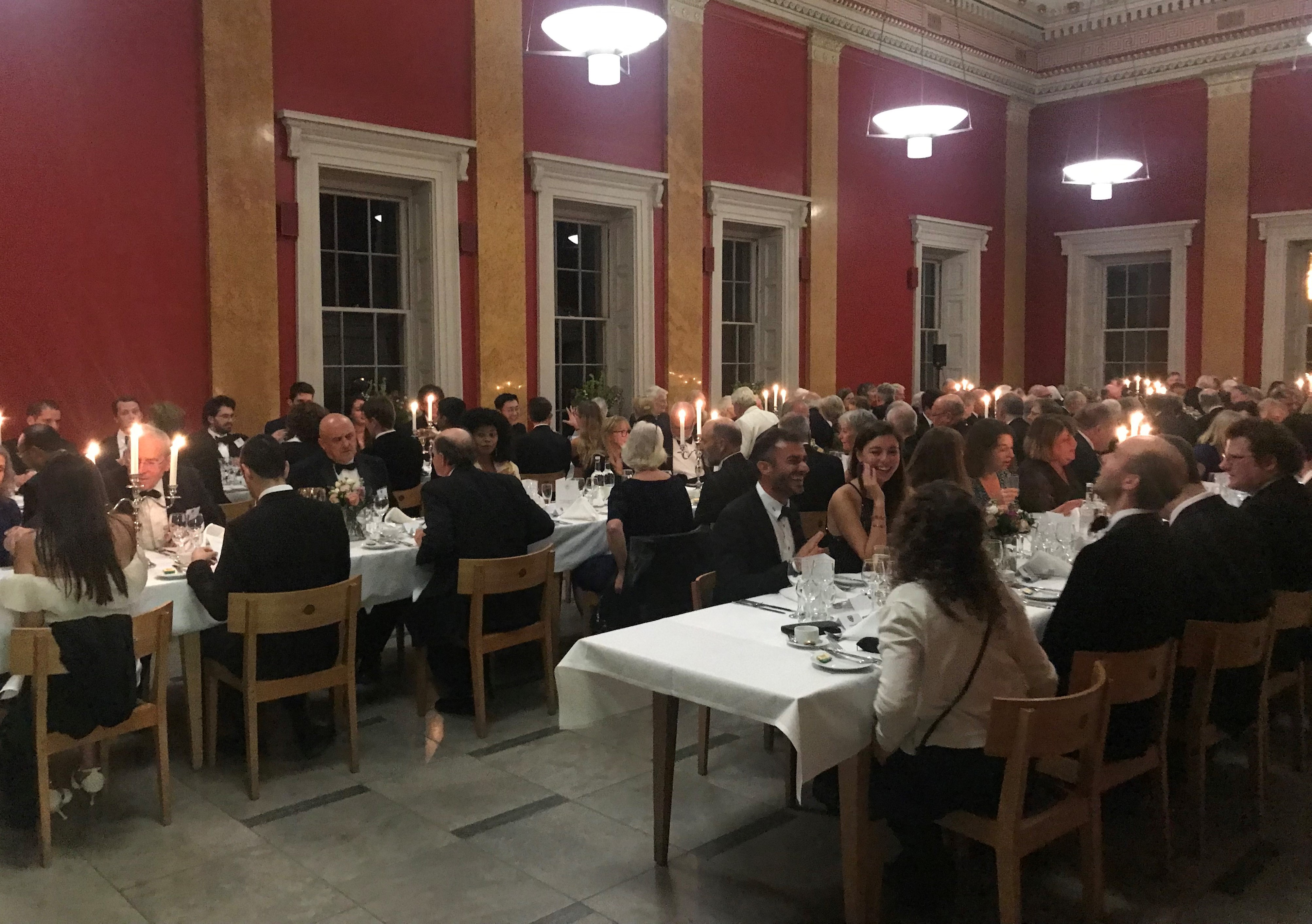 Founded in 1922, the aim of the Association is to keep alumni in touch both with each other and the College.

All profits from the sale of merchandise are donated to the Association's Alumni Student Fund, providing grants to Downing students facing financial hardship.