Against All the Odds 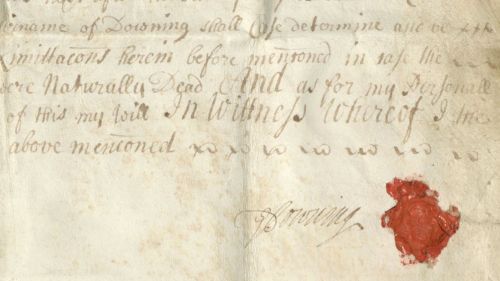 Three hundred years ago today, on 20 December 1717, Sir George Downing, 3rd Bt, signed the will which would lead eventually – and almost miraculously – to the foundation of Downing College on 22 September 1800.

Sir George Downing and his wife Mary were estranged shortly after their marriage in 1700, which led Mary to petition the House of Lords to have their marriage dissolved because ‘such disgusts and aversions’ meant that a reconciliation was impossible. The petition was refused, but they became legally separated in 1717. This meant that neither could have legal heirs of their own while the other lived, and so it was that later that same year Sir George formalised his plans for the inheritance of the vast Downing estates accumulated by his grandfather.

Sir George added one significant final provision to his will: that if there were no surviving male heirs, the family name would perpetuate through the foundation of a new college in Cambridge. In 1717, with four young male heirs in line, the likelihood of ‘Downings Colledge’ ever coming to fruition was very small indeed.

On the death of Sir George, on 9 July 1749, he was survived by all four heirs named in his will. Sir Jacob Garrard Downing inherited the title as planned but when he died, childless, in 1764, the other three heirs were already dead. After a long and complex legal battle with Sir Jacob’s widow, (see ‘250 Years since Downing College wasn’t founded’) with damaging consequences for the financial health of the estate, Downing College was finally granted its Royal Charter on 22 September 1800.

Against all the odds, Downing College was the first new Cambridge college in over 200 years, and became the permanent preservation of the Downing family name our founder had sought to secure.

An archive exhibition exploring the circumstances surrounding the Founder’s will is located in the Maitland Robinson Library Octagon, together with a display celebrating ‘300 Years of Giving’ since this significant event in the College’s history. Contact the archivist to arrange a visit.

For more information see the full 'From the Archives' article.

Extracts from the original, signed Founder’s will courtesy of The National Archives (Ref. DEL 10/118)