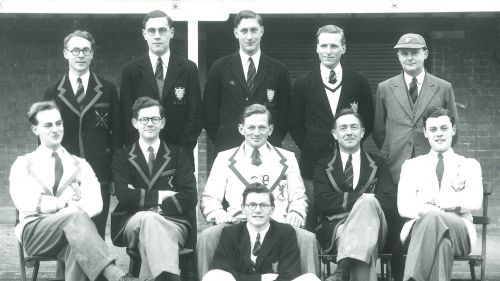 Downing College is sad to hear the news of the death of popular author Clive King at the age of 94.  King, who died in Norfolk on 10 July, wrote the children's classic Stig of the Dump, which has never been out of print and has sold more than 2 million copies since it was first published in 1963.

David Clive King (b.1924) matriculated at Downing College in 1941, gaining an Exhibition to study English under Dr F. R. Leavis.  In his second year, he was elected Assistant Secretary to the Amalgamation Club and Secretary of the Literary Society, but only completed four terms before joining the Royal Navy in 1943, with whom he served until October 1946.  He then returned to the College, studying English before changing in his final year to study for the Certificate in Russian.  In his final year, 1947-8, he was Secretary of the Amalgamation Club and also Captain of the Boats.  He is pictured (above) in 1948 as Captain of the Boats.