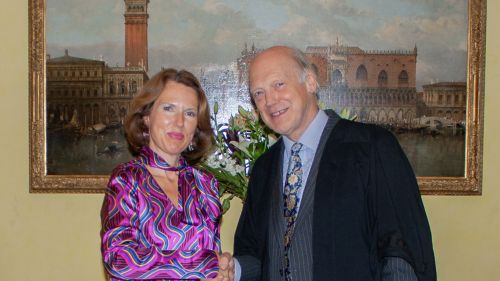 The Master, Professor Geoffrey Grimmett, says: "Caroline has been a most excellent ambassador for Downing and the United Kingdom since departing our quads and courts. She joined the Foreign and Commonwealth Office in 1995 after qualifying as a barrister. Then to a number of high visibility, and therefore probably rather testing posts in a number of places around the world, including Moscow, Beijing, Brussels, London, and of course her prominent position as HM Consul General to Hong Kong and Macao from 2012-16. Caroline is currently Europe Director in the Foreign and Commonwealth Office.

It is an honour for the College to welcome Caroline back as an Honorary Fellow."