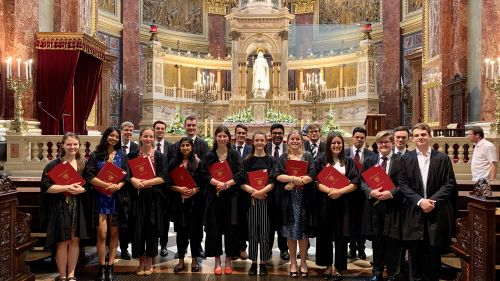 The Chapel Choir ended a hugely successful year of singing with their annual international tour, this year to Hungary.

The tour began in Budapest, with the huge privilege of singing Mass in the vast neoclassical St Stephen’s Basilica, on a national day of remembrance for those Hungarians who lost their lives during the Holocaust. The Choir then traveled to Cambridge’s twin city, Szeged, in the south of Hungary, where they were hosted by the city to cultivate and forward friendly links between Cambridge and Szeged. The Choir was invited to sing Mass and a concert at the Votive Church of Szeged, built after much of the city was destroyed by floods in the late 19th century.

On the final day of the tour the Choir performed a joint concert with the Argenteus Choir of Szeged, to a sell-out audience in the phenomenal acoustic of the New Synagogue - the 4th largest synagogue in the world, and an incredibly important place of worship for the Jewish community in Szeged.

The tour was a fantastic end to the year and hugely well received by all who attended the concerts and services, and the Choir is now looking forward to the next academic year in Downing, and what next year’s international tour might bring!