Downing alumni row in Head of the Charles

HomeDowning alumni row in Head of the Charles 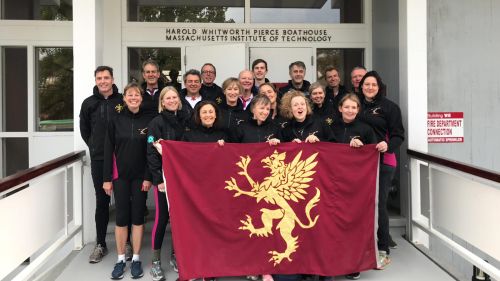 Two Downing College alumni crews (above) took part in the Head of the Charles regatta in Boston, USA, over the weekend of 20 and 21 October.

It's the world's biggest regatta with 11,000 competitors. The Segreant men (below) last raced in 2016 and were joined this time by last minute replacements Jeremy Boardman and “super-sub” Ian Watson as Gus Pope and Rory Ross were sadly unable to make the trip.  Ably coxed by current Captain of Boats Stephen Harris, there were four other ex DCBC captains on board (Paul Hatfield, Chris Harbourne, Simon Wood and David Shalders). Blue Richard Spink and Goldie colour Charlie Green completed the crew.

Simon Wood said, "Our Friday practice, and only outing in the previous 24 months, went well. Race day dawned with a strong headwind and strong stream. We set off in a boat hired from MIT rating a solid 30 in the Senior Masters Eights event. We ran out of power somewhat in the last third of the race but were pleased to finish in 17.48 minutes coming 39th out of 62 entries. This after having a 20 second delay at Bridge 1 due to "traffic".  We were overtaken by the US 1980 Olympic eight but passed a couple of crews ourselves including a US navy eight rowing as The Gnarly Goats." Simon added, "The row was great fun and surprisingly comfortable. Much post race analysis followed of course and a top half finish seems a reasonable target for next time without adding materially to the training load!"

Find out more about the Segreants on the Downing College Boat Club website.