Downing Chapel Choir tour to Canada and the US

HomeDowning Chapel Choir tour to Canada and the US 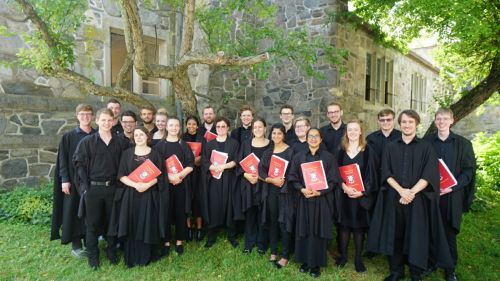 It was a travel-worn and weary Downing Choir who landed in Montréal late in the evening on Saturday 7 July. Our hired coach eventually arrived, and thus unfolded the first drama of the tour: upon counting the twenty-two boarded passengers, we arrived at a total of twenty-three...this procedure was repeated several times, until it transpired that some random girl had decided to join us on the bus. The coach driver was not amused as he unloaded everyone’s luggage in search of hers – she had of course been the first to load it on!

Having settled down in our accommodation for the remainder of the night, 7am saw most people up and bouncing around and wanting to get out and see some sights. In the afternoon we reconvened in Christ Church Cathedral for the first musical event of the tour: the no-small matter of a live broadcast of Choral Evensong on Canadian local radio (which, we discovered later, was also aired to most of the rest of Canada). The greatest challenge was having all of us crammed into the organ loft, where it was over 40°C, and severely lacking in sightlines. But we managed to make a joyful noise as Stanford in C resounded over the airwaves, and we rewarded ourselves with a fabulous meal in a local brewery pub, where the Postgraduate Organ Scholar took great delight in introducing everyone to ‘poutine’ – a delicacy native to Québec consisting of chips, cheese, and gravy.

We had no further musical engagements in Montréal, and so the next couple of days were spent taking in the sights, exploring, and generally relaxing. Particular highlights were the Botanical Gardens (“simply stunning”), the tallest inclined tower in the world (“wonderful views”), Mont Royal Park (where a certain third-year bass entertained the crowds on a piano he just happened to find lying around), and the Notre-Dame Basilica (“amazing but rather kitsch”).

Wednesday 11 July saw us crossing the US border and driving through the lush green countryside of Vermont state. The weather was easier to deal with as temperatures dropped to the high twenties and we were able to breathe once more. We sang a joint concert with the Counterpoint choir and their conductor Nathaniel Lew (former organ Scholar of Gonville & Caius College) at the First United Methodist Church, Burlington, each choir performing separate ‘sets’ but then coming together to sing Wood’s glorious O thou, the central orb. We enjoyed chatting with members of the audience afterwards before leaping aboard another coach and continuing our journey to Woodstock.

On Thursday 12 July we sang the first service of the Music & Liturgy Festival organised by Professor Oliver Goodenough, a former Visiting Scholar to Cambridge and Downing, who along with his wife Alison had been enormously kind in arranging hosts and activities for our stay in Woodstock. Even the reduction of the Junior Organ Scholar and Assisting Organist to a fit of helpless giggles by a rogue organ stop (this was no ordinary cipher) failed to prevent Brewer in D and our favourite Wood anthem from raising the roof in St James’ Church, and it was good to have the opportunity to sing alongside our hosts and begin to get to know them.

After compline on Friday Chris Hamilton (Junior Organ Scholar) gave an excellent recital on the Albright Memorial Organ at St James’, playing a programme of Bach, Buxtehude, and others. This was a busy day for the organists, as I, in my role as Assisting Organist, had given a presentation of some of her research earlier in the day, as part of the second Education Session.

We had a brief respite from the searing heat on Saturday 14 July, as it rained. And rained. And rained...for a good thirty minutes. Unfortunately some of us were prowling around a forest sans wet weather gear at the time, but we found what we were looking for (i.e. ‘The Pogue’ – a great big man-made lake), and also saw a red squirrel and a colossal and achingly beautiful barn owl, which had the sense not to hang around to be photographed. After a hurried descent back into town, we met at the Roman Catholic Church of Our Lady of the Snows for a rehearsal before Mass. Palestrina’s Missa brevis was very well received by the congregation, and we enjoyed experiencing a different liturgy from that which we sing regularly in College.

The final day of the Festival came round all too quickly, but we were kept busy with the morning Eucharist (Haydn’s Little Organ Mass accompanied by strings and organ, with a beautiful soprano solo from leaver Jasmine Davies) and contemplative Evensong (Byrd’s Fauxbourdons and Schütz Deus misereatur) after a brief dip in the river after lunch. The evening was spent in the Parish Hall being spoiled by our hosts as they laid on a delicious meal, and many appreciative speeches, which were reciprocated, of course. We were sorry to leave the following morning, and even more sorry to be woken by fire engines, vast quantities of smoke, and the water cut off, as crews fought to bring under control a blaze in the centre of the town. We were relieved to hear later that no one had been hurt, although the hub of Woodstock would never be the same again.

We returned to Montréal for a day’s recovery, and a chance to see things for which there had not been time earlier in the trip. We all met for a final meal together at the most fascinating burger restaurant, complete with health warnings and threats of having to sign disclaimers if one chose to order the hottest flavour (nobody did). On Wednesday we flew to Toronto, and then on to London Gatwick, at which point a direct correlation was observed between the lowering of the Tour Manager’s blood pressure and the gradual dispersion of the group, even though we had to leave the now former Postgraduate Organ Scholar to fend for himself in customs...