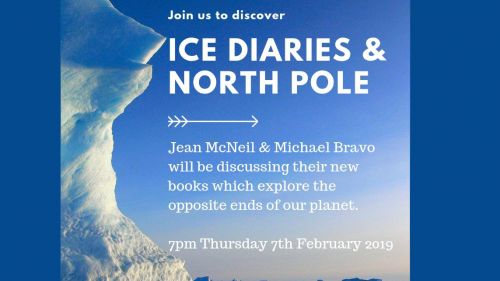 Downing Fellow Dr Michael Bravo, author of North Pole: Nature & Culture, and Jean McNeil, author of Ice Diaries: An Antarctic Memoir, will discuss their new books at an event to be held at the Lutyens & Rubinstein bookshop on Thursday 7th February 2019 at 7pm. Tickets are available for the event, priced at £10/£5.

Michael Bravo has spent thirty-five years travelling, researching, and writing about the Arctic world. From an early age he was captivated by the oral traditions and indigenous knowledge of northern peoples. He has worked collaboratively with Sami as well as Inuit hunters, artists and elders, exploring the history of encounters with western travellers through a cross-cultural lens. In 2014 he co-authored the Pan-Inuit Trails Atlas (paninuittrails.org), akin to the Aboriginal songlines, revealing the true and hidden geography of Arctic North America, a network of precise and tightly connected Inuit trails crisscrossing reaching all the way from Alaska to Greenland.

In North Pole, Bravo sets his sights on the most mysterious polar symbol of our planet, the North Pole itself.  Too often told simply as a race to reach the Pole first, here for the first time, Bravo shows how visions of the North Pole have been supremely important to the world’s cultures and political leaders, from Alexander the Great to Hindu nationalists. Tracing poles and polarity back to sacred ancient civilizations, this book explores how the idea of a North Pole has given rise to utopias, satires, fantasies, paradoxes, science fiction and nationalist ideologies, from the cartographers of the Renaissance to the mystics of the Third Reich. Michael Bravo shows that visions of a sacred or living pole can help humanity understand its twenty-first-century predicament, but only by understanding the deeper history of poles in forging a polarised world.

Jean McNeil spent a year as writer-in-residence with the British Antarctic Survey, and four months on the world’s most enigmatic continent ― Antarctica. Access to the Antarctic remains largely reserved for scientists, and it is the only piece of earth that is nobody’s country. Ice Diaries is the story of McNeil’s years spent in ice, not only in the Antarctic but her subsequent travels to Greenland, Iceland, and Svalbard, culminating in a strange event in Cape Town, South Africa, where she journeyed to make what was to be her final trip to the southernmost continent.

In the spirit of the diaries of Antarctic explorers Robert Falcon Scott and Ernest Shackleton, McNeil mixes travelogue, popular science, and memoir to examine the history of our fascination with ice. In entering this world, McNeil unexpectedly finds herself confronting her own upbringing in eastern Canada, the lifelong effects of growing up in a cold place, and how the climates of childhood frame our emotional thermodynamics for life. Ice Diaries is a haunting story of the relationship between beauty and terror, loss and abandonment, transformation and triumph.

‘McNeil’s gripping book is a vivid depiction of the human community in the “granite quarry-crossed-with-a-penal-colony” of a polar base camp. This sci-fi landscape is suffused with menace and foreboding but so, McNeil remembers, is home.’ Patrick Barkham, Guardian Best Books of 2018

‘Bravo has written a rich and insightful book about our ideas of the pole. Although his focus is the North Pole, it left me thinking about the stories we all tell ourselves in our everyday lives.’ Alun Anderson, New Scientist

JEAN McNEIL is the author of fourteen books, including six novels and a collection of short fiction. In 2005-6 she was writer in residence in Antarctica with the British Antarctic Survey (BAS).  She has undertaken official residencies in the Falkland Islands, Svalbard, Norway, and aboard ship-based scientific expeditions to Greenland and across the Atlantic Ocean. She teaches at the University of East Anglia, where she is Reader in Creative Writing, and lives in London.

MICHAEL BRAVO is the author of three books and numerous scholarly and popular articles. He is Senior Lecturer at the University of Cambridge, a Fellow of Downing College, and Head of Circumpolar History and Public Policy Research at the Scott Polar Research Institute. He has been visiting Full Professor at the Arctic University of Norway (2014-17). He is the author of Narrating the Arctic (2002) and Arctic Geopolitics and Autonomy (2010).