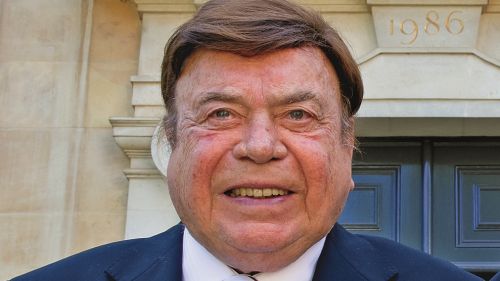 We are sorry to report the death of Dr Alan N Howard MA PhD FRIC, who died yesterday aged 91 after a long battle with cancer.  We extend our sincere condolences to his wife Lydia, to his son, Jon, his daughter, Julie, his grandchildren, and extended family during this sad time.

Dr Howard attended the City of Norwich School and matriculated at Downing in 1948 to read Natural Sciences, graduating in 1951 and gaining his PhD in 1955. He pursued a successful research career and was elected to a Fellowship of the Royal Society of Chemistry in 1968.  Dr Howard’s work in the Department of Medicine into obesity in the 1970s  led to the development of what later became known as the Cambridge Diet, which enjoyed phenomenal successful in the UK and Europe.

Dr Howard founded the Howard Foundation in 1982, which funded Howard Lodge, Howard Building, and most recently the magnificent Howard Theatre, which forms Howard Court.  The Foundation has also responded to the College’s urgent needs, including the Mays Wild Fellowship, the Hopkins Parry Fellowship, the Heong Gallery and Downing Arts, student support, and the College’s landscaping projects.  The Foundation also commissioned and funded A Classical Adventure, a history of Downing, its architecture, and donors.   These gifts, inspired by Dr Howard and his son, have transformed the College in many areas, most notably in the professional level theatre and conference facilities that support a thriving arts programme and the conference business, which underpins the College‘s finances.

To recognise his outstanding contribution to Downing, Dr Howard was elected to an Honorary Fellowship and in 1999 to the first Wilkins Fellowship.  He was presented with the Chancellor’s 800th Anniversary Medal. Dr Howard was also elected to honorary Fellowships at The University of Ulster and Waterford Institute of Technology in recognition of this contribution and commitment to advancing treatments for age-related macular degeneration and Alzheimer’s disease.

Details of the funeral

The funeral of Dr Howard will take place on 16 July 2020 at 1pm at Trumpington Church.  The restrictions due to the Covid-19 pandemic mean that the congregation is limited to only 30 invited people.

The service will be live streamed through the Howard Foundation website.

After the service, a video recording of the service will be available on the same link, and you will also find details if you wish to make a donation in memory of Dr Howard.