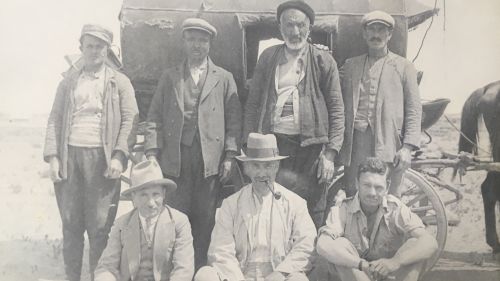 In an exciting project for the College Archive, a collection of 81 glass slides from the collection of classicist Professor William Keith Chambers Guthrie (Master of Downing College, 1957-72, pictured far right above) has been conserved, digitised and made publicly available via the Cambridge University Digital Library.

The slides relate to epigraphical expeditions in Central Anatolia between 1929 and 1932, when Guthrie assisted W. M. Calder and W. H. Buckler in a survey of monumental inscriptions across a widespread region of ‘Asia Minor’ (modern-day Turkey), later published in 'Monumenta Asiae Minoris Antiqua' Vol. IV (MUP, 1933).

College Archivist, Jenny Ulph, says “I am very excited to announce the completion of this digitisation project, which will enable wider access to this fascinating and important collection.”

Professor Guthrie was an eminent classical scholar and author. He graduated with a starred First in Part II of the Classical Tripos in 1928 and was awarded the Craven Studentship which required him to undertake research outside Cambridge and led to him joining Calder’s expeditions. He was a Fellow of Peterhouse College for more than twenty-five years before his election as Master of Downing College in 1957. His travels in Asia Minor and those he met on these expeditions, including locals, made a strong impression on him and he frequently referred to these in his books. He wrote sixteen books on ancient philosophy over his long and distinguished academic career.

The slides are part of a larger collection of personal papers, slides and other items belonging to Professor Guthrie, deposited in the College Archive by the Guthrie family in 2018-19. A catalogue of some of this collection is available online on Janus.

Cataloguing is continuing on the rest of the collection. Any enquiries should be directed to the College Archivist, archivist@dow.cam.ac.uk.

Guthrie seated far right, next to William Moir Calder and members of the expedition team (DCPP/GUTH/6/1, reproduced with permission of the Guthrie family)