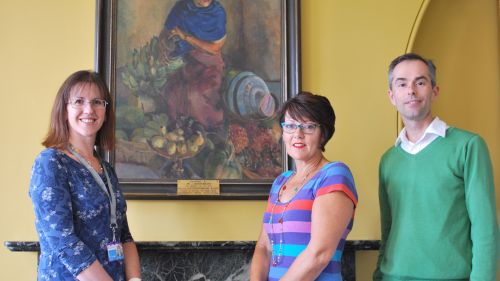 Paintings given in memory of student Harry Dooyewaard (1938) return to College following conservation.

The niece of a student killed during the Second World War paid a visit to Downing to see two paintings given in his memory which have been recently restored.

Harry Dooyewaard (1938) was killed in action in 1944, aged 24 years, when the tug boat he was aboard was torpedoed.  In 1951, Johannes Dooyewaard, Harry’s father, presented two paintings to the College in his memory. The paintings, ‘A Bali Girl Selling Fruit’ (painted in Bali, 1930-1) and ‘Mongolian Ponies’ (painted in Mongolia, 1926), were painted by Harry’s uncle, Willem Dooyewaard (1892-1980), and originally hung on the walls in the Junior Combination Room (JCR). In 2019 the paintings were conserved and moved to the newly-refurbished West Lodge function rooms.

Downing College was delighted to welcome Harry's niece, Liz Beak, on a visit to view the paintings.  On her visit, Liz Beak brought a number of items relating to Harry's school days in Ramsgate and his time in College to add to the College Archive.

Jenny Ulph, College Archivist, said: "After seeing the pictures donated in Harry's memory, it was a pleasure to meet his niece and learn more about his life and naval service in the Second World War. It was especially poignant to see photographs of Harry as a young man, before, during and after his time at Downing College. I was very pleased to accept these, along with other material relating to Harry’s life, for the College Archive to enable his story to be shared with the wider College community."

Dr David Pratt, Fellow Archivist, said: "The two pictures by Willem Dooyewaard are twentieth-century treasures in the College collection and a fitting tribute to Harry. I am delighted that the conservation work has been so successful - the picture of Mongolian Ponies has been transformed and is especially evocative. It feels fitting for Liz Beak now to have viewed the pictures and to have told us more about Harry's life."

Click here for more information about Harry's life and the recent acquisitions or contact the Downing College Archivist.