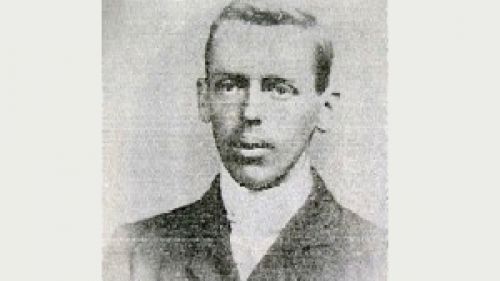 Today we remember Joseph Blogg who died 100 years ago, the only College staff member to be killed in action during the First World War.

Joseph Andrew Martin Blogg (1881-1918) was born in Buckinghamshire, the son of Joseph and Sophia Blogg. The family later moved to Grantchester, near Cambridge and Joseph took up a position at Downing College as a cycle cleaner and shoe black. In 1907 he married Rose Squires, a widow who may also have worked at the College, and they had two children. Following the outbreak of war, Joseph appears to have continued working at the College for some time before enlisting in the 1/1st Cambridgeshire Regiment as a Private. The College’s Governing Body minutes in June 1916 reported his enlisting and agreed that ‘an allowance at the rate of £2 a quarter be paid to his wife’ in his absence.

Joseph served in France, originally as a stretcher-bearer, and on 25 April 1918, he was awarded the Military Medal (awarded to those below commissioned rank) for gallantry in the field. The College Minutes recorded the Governing Body’s congratulations to Private Blogg when the news reached them in June 1918.

Sadly, Joseph was wounded in action in France on 28 August 1918, and died on 4 September 1918.  As the only College ‘servant’, or member of staff, who died during the First World War, he was not originally named on the Downing College war memorial, which listed the names of ‘Members’ of the College (ie students, alumni and Fellows), although he was commemorated with these men during the College’s memorial service in February 1920.

This year, to mark the centenary of Private Blogg’s death, the College has commissioned a new plaque to commemorate him alongside the other men who gave their lives. The new plaque, etched in bronze and mounted on an oak panel like the original above it, has been left uncoated to tarnish naturally.

For more information on Joseph Blogg, please see our Roll of Honour.