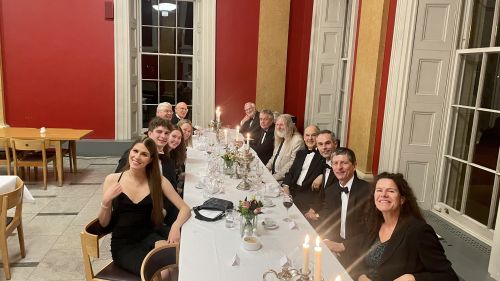 The Maitland Historical Society celebrated its 100th anniversary with a centenary dinner and talk on Saturday 19 November 2022.

The Maitland Historical Society at Downing College was founded on 27 April 1920 in the rooms of Keith Norman Hillson, who was elected as its first President. It was initially named the Downing College Historical Society, but was immediately renamed in honour and memory of Frederic William Maitland, renowned legal historian and Downing Professor of the Laws of England from 1888 until his death in 1906.

Over the course of its 100 year history, the Society has continued to provide a regular and varied programme of events for Downing College students and Fellows, even during the Second World War, welcoming historians to speak on a wide variety of subjects and, in more recent years, arranging historical field trips for members.

The centenary dinner began with Downing Fellow Dr David Pratt giving a brief talk on the centenary of the Society, followed by a lecture from guest speaker Professor Richard Rex on The Dissolution of the Monastries. After the talks, speakers and guests enjoyed dinner in the Main Hall.

The event was attended by 28 alumni and 25 current undergraduates, as well as former Director of Studies, Dr Ted Powell.