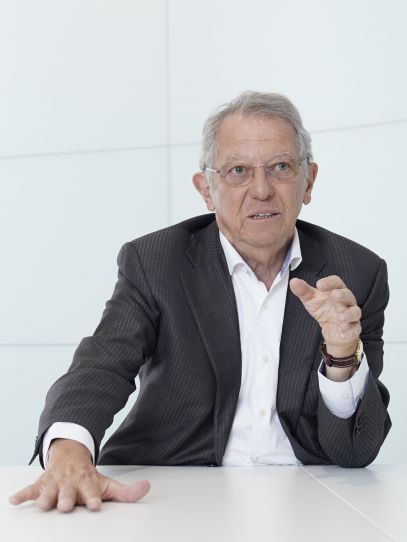 A former Cambridge University 1920 Professor of Physical Chemistry,  Sir David King was Master of Downing College from 1995 until 2000 when he took on the post of Chief Scientific Advisor to the UK Government under both Tony Blair and later, Gordon Brown. Subsequently he served under David Cameron and Theresa May in the FCO as the UK’s Climate Envoy,  2013-2017.

Born in South Africa, he began his academic career at the University of Witwatersrand, in Johannesburg, and came to Downing via the Universities of East Anglia and Liverpool. He served as Chancellor of the University of Liverpool, 2009-2013.  He was appointed to the Honorary Fellowship in 2001.

Among the countless accolades Sir David has garnered for his contributions to academic and public life, he was elected Foreign Fellow of the American Academy of Arts & Sciences, 2002, received a Knighthood in 2003 and was made Officier of the Legion d’Honneur in 2009. He has received 23 Honorary degrees from Universities around the world.

In 2015, Sir David led the launch of Mission Innovation, a collaborative programme between 22 countries now spending $22bn pa on R&D  to deliver the post-fossil-fuel era technologies needed.  His recent work is directed towards alerting governments and institutions around the world to the dangers of the escalating climate crisis and the urgent need for a committed programme of 'climate repair'.  He co-authored The Hot Topic with science writer Gabrielle Walker as a means of addressing the growing threat of global warming.

Sir David is currently an Affiliate Partner at SYSTEMIQ Ltd, and Senior Strategy Adviser to the President of Rwanda. As a guest on Radio 4’s Desert Island Discs, Sir David clearly envisioned an escape, eventually, from all things scientific by choosing oil paints and canvases as his means of spiritual survival.