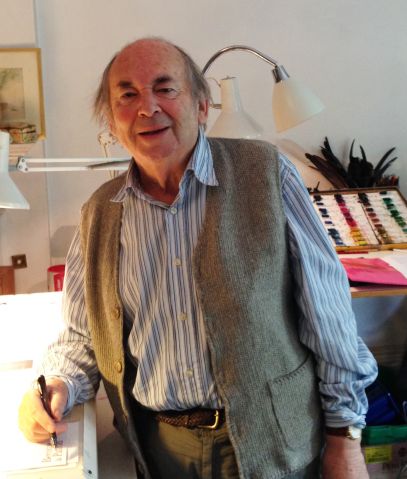 Generations of young readers have grown-up loving the instantly-recognisable, pen-and-ink drawing-style that has brought not only Sir Quentin’s own charming stories to life but conjured the definitive images of dozens of the most memorable figures in children’s literature, including (thanks to his long association with Roald Dahl), Willy Wonka, Matilda and the BFG.

Quentin Blake read English at Downing from 1953-56 before going on to teach at the Lycée Français in London and, for twenty years, at The Royal College of Art, where he was Head of Illustration from 1978-86. Beyond the signature warmth of his own joyfully madcap cast of characters (Mister Magnolia, Mrs. Armitage et al), his illustrations have adorned the books of Russell Hoban, Joan Aitken, Dr. Seuss and many more.

He became Britain’s first Children’s Laureate in 1999-2001 and was appointed CBE in 2005, knighted in 2013 and, in recognition of the beloved status he holds in France, became a Chevalier of the Legion d’Honneur in 2014.

Sir Quentin’s illustration work for the Folio Society on classics such as Candide and Don Quixote formed the focus of an exhibition at the Heong Gallery (which he supports as a 1717 Patron) at Downing in 2017 and he is a regular guest of honour at events organised by the thriving College society that bears his name.