It seems somehow fated that an organ Kenneth Tickell was involved with renovating and re-installing during his first years in organ-building should have been the one whose replacement stood on the shop floor when he died suddenly. From his first position with Grant Degens and Bradbeer, he found himself working on Downing College's then organ in 1982.

Because of the restricted headroom and barrel vaulting of the Chapel ceiling, the proposal was for a case loosely in the style of Gottfried Silbermann whose organ cases in Saxony tended to favour this relatively wide and low shape and made a feature of gently rounded towers, a style he thought would suit the Downing Chapel well.

The completed organ in the Chapel; the original watercolour concept sketch by Kenneth Tickell; view of the Chapel interior by Tim Rawle. 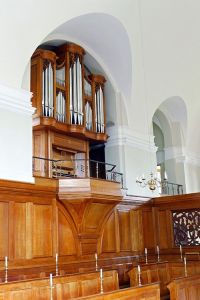 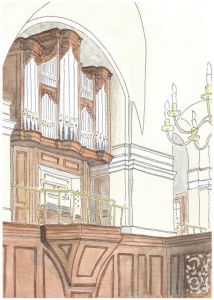 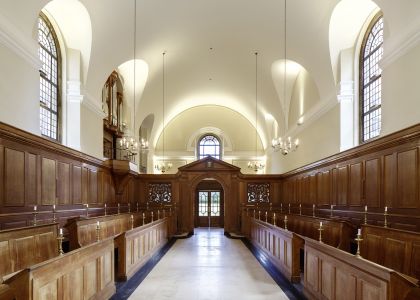